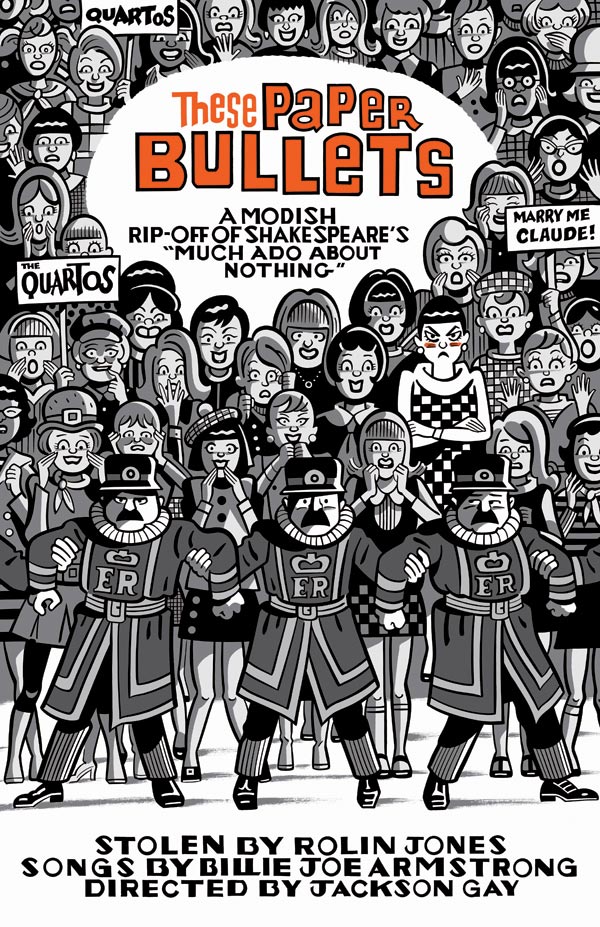 “BEST OF 2015! Rolin Jones’ Much Ado About Nothing tweak set in mod, mop-topped ’60s London was the year’s foremost smile producer, a riotous farce in the Hard Day’s Night tradition and a poignant romance true to the Benedick and Beatrice we all know. Helmed with unflagging invention by Jackson Gay, the production originated at Yale Rep and went on to New York’s Atlantic Theater Company, emblematic of the cooperation America’s regionals may need to start relying upon.”

“Green Day’s Billie Joe Armstrong contributed perfect Beatles-pastiche songs to These Paper Bullets! —an ingenious adaptation of Much Ado About Nothing reset in mid-’60s Liverpool. Bullets reaches peaks of zany goofiness. See it!”

“Critics’ Pick! Four Stars! Merry sex warriors spin like a record on the turntable stage of These Paper Bullets!, Rolin Jones’s cheeky revamp of Much Ado About Nothing. Set in 1964 London, the show gives Shakespeare’s rom-com a mod refashioning. Studded with Beatles-esque songs by Green Day’s Billie Joe Armstrong, the show is a clever bit of tickle. Jones’s script incorporates a surprising amount of Much Ado’s original language, which splashes amusingly through the lads’ Liverpudlian accents. Snappily directed by Jackson Gay, with tremendous costumes by Jessica Ford, These Paper Bullets! fizzes with sexual liberation. Keira Naughton is hilariously louche, and Nicole Parker’s bravura physical comedy made me laugh harder than anything I’ve seen at the theater all year. The show is well acted all around, but the women are particularly fab.”

“Strip down the Beatles, strip down Green Day to the bare bones, the chords, the vocal lines, and you’ll find a lot of shared DNA. The songs are ridiculously good.”

“Dynamite from top to bottom!”

Meet the Quartos: Ben, Claude, Balth, and Pedro. Their fans worship them. Scotland Yard fears them. And their former drummer will stop at nothing to destroy them. Can these fab four from Liverpool find true love in London and cut an album in seven nights? These Paper Bullets! is a modish rip-off of Shakespeare’s Much Ado About Nothing with a serious backbeat.

These Paper Bullets! had its world premiere March-April 2014 at Yale Repertory Theatre.

Atlantic Theater Company, in association with the Geffen Playhouse and New Neighborhood, presented the New York premiere of the Yale Repertory Theatre production of These Paper Bullets! November 2015-January 2016.