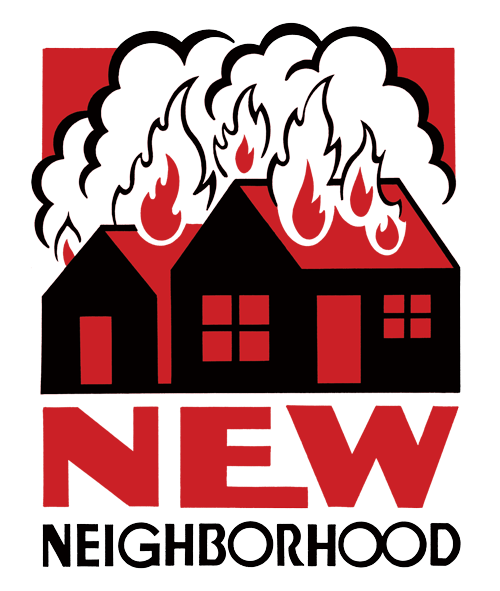 Born out of the Low Brow/Hi Fi 2014 Yale Rep production of These Paper Bullets! and the unintended financial backing of Rupert Murdoch, NEW NEIGHBORHOOD is a theater and television company whose sincerity and authenticity are so combustible, it cannot be housed under one roof for too long without doing severe structural damage. With new work, bruised work, all-singing, all-dancing, foul-mouthed musical work, NEW NEIGHBORHOOD seeks to harvest the organs of its audience and sell them back to their owners within the time houselights dim and rise, or the DVR records and you delete. NEW NEIGHBORHOOD is a particular ordinance of Actors, Designers, Directors, Dramaturgs (all the hot D’s!), Musicians, Graphic Novelists, Producers, Writers, Widows, Widowers (all the lousy W’s) and bad, browned-on-both-sides Balladeers. NEW NEIGHBORHOOD is the cocktail party that spills barefooted onto the lawn!  NEW NEIGHBORHOOD is the stolen painting that washes up on shore! NEW NEIGHBORHOOD is the lovechild of Electric Light Orchestra and Tonya Harding! NEW NEIGHBORHOOD finds a show, produces the shit outta of it, and disappears into a cloud of train smoke! The. End.

An Hour-long Drama Inspired by This American Life’s episode, “129 Cars.” For Fox Television Studios A portrait of our struggling American Middle Class as seen through the life of Freddie Dittmer, General Manager and former owner of Dependable Konamatsu (formerly Dependable Dodge, formerly Dependable Dittmers) and the days and nights of his car lot co-workers…the men and women who daily sell, buy and fix the gateway product of the American Dream…The Japanese Automobile.

Your favorite band from Essex-on-Haugatuck inexplicably tesseracts its dysfunction back to Jack Ruby’s Dallas Burlesque Club for a special one night only concert event. Songs, Betrayals, and Triangulation as only The Petersons can bring it. THE PETERSONS! are a quintet—occasionally a septet—of polymathic actormusicancomedians who pepper original rock tunes into a serialized comedy about a misfit band from upstate New York who share a house and a stage. The Petersons! have performed for years around New York City at venues like Joe’s Pub, Ars Nova, Caroline’s on Broadway and the Bottom Line. Because he enjoys making money, Adam Stein (Mr. Peterson) currently serves as a writer/supervising producer on the bonkers CBS drama Under The Dome based on Stephen King’s immense novel. He’s appeared in Wait Until Dark by Jeffrey Hatcher at the Geffen Playhouse opposite the exceedingly game Ms. Alison Pill, on Broadway in The Lion King, and at regional theaters around the country, including Steppenwolf, the Old Globe, the Guthrie, the McCarter, and five summers at the Williamstown Theater Festival, where 23 years ago he met… Keira Naughton (Mrs. Peterson) recently kicked ass in the world premiere of Rolin Jones’s These Paper Bullets! at Yale Rep, where she will kick ass again this spring in the world premiere of Shelia Callaghan’s Elevada; with more ass-kicking to come this summer in New Neighborhood’s world premiere of I Saw My Neighbor On the Train and I Didn’t Even Smile by Suzanne Heathcote at Berkshire Theatre Group. Matthew Saldivar (Julio de los Flacos) appeared as Black Stache in Peter and the Starcatcher, in James Lapine’s Act One at Lincoln Center Theater, and most recently played someone called Johnny Sandwich in the critically acclaimed Honeymoon in Vegas on Broadway. Pete Simpson (Pete Peterson) tours the world with downtown masterminds like Richard Maxwell, Young Jean Lee, the Wooster Group and Blue Man Group, and starred last fall in the controversial Straight White Men at The Public Theater. Rick Holmes (Rick)—who played Lord Astor in Peter and the Starcatcher, as well as principal roles in Spamalot, and many more—is currently on the Great White Way in Kander and Ebb’s The Visit. Evan Robertson (Father Tom) pretentiously went to Yale, then Juilliard, and is—by far—the finest musician in the band. Every Petersonic theatrical experience is brand new and unpredictable…with surprise celebrity cameos! Previous guests include Michael C. Hall, Paul Newman, Michael Emerson, James Naughton, Gavin Degraw, John Cameron Mitchell, and many, many others. We won’t tell you who’s in store for the next show…you’ll just have to come to find out!

NEW NEIGHBORHOOD retreats to SPACE on Ryder Farm!
Plabyill.com — May 27, 2015

NEW NEIGHBORHOOD gets SPACE on Ryder Farm!
Broadway World — May 26, 2015

Offscript: This Is Going to Be a Sexy Podcast – Live from Humana!
American Theatre – April 17, 2015

Here Comes the NEIGHBORHOOD: The Theater Party of the Year – But the Best Is Yet to Come!
New Haven Theater Jerk – April 17, 2015

NEW NEIGHBORHOOD: Offbeat, Eclectic Company May Own a Race Horse and Buy a Bar in New Haven!
Variety – April 10, 2015

World Premiere of I Saw My Neighbor On the Train and I Didn’t Even Smile
The Berkshire Eagle — March 19, 2015

These Paper Bullets! Is a Theatrical Stunner!
Talkin’ Broadway — March 2014